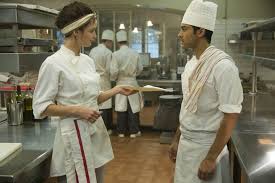 “It was an education for all of the senses. I was taught to cook, but mostly I was taught how to taste.”  – Hassan Kadam, “The Hundred-Foot Journey”

The Kadam family moved across the street from Michelin-starred eatery, their dreams of opening an Indian restaurant near Saint-Antonin-Noble-Val in the Midi-Pyrénées things did not go as planned…at first. Welcome to day seven of #30daysoftravelthroughcinema. I rewatched “The Hundred-Foot Journey” for this review and it was as heart-wrenching as I remembered.

The film starts out in Mumbai, the Kadam family has a family restaurant, and the mother is training the son, Hassan (Manish Dayal) to become the main cook. However, after riots broke out and, unfortunately, the mother did not make it, the family, particularly Papa, decided to start a new life for the family in London. The Papa was a dreamer. A visionary. He was never embarrassed or afraid to try something new or go somewhere different. In fact, the entire family learned to adapt to every culture they lived in.

As Haddam stated, “I found in England the vegetables had no soul, no life.” Papa loaded up the family and headed to France. After a series of unfortunate events, he found an abandoned restaurant across the street from a Michelin-starred eatery, “that even the President of France eats at.” The owner of the restaurant, Madame Mallory (Helen Mirren), was cruel in many ways to the Kadam family and was quite vocal in her distaste of the family opening an Indian restaurant in France. Haddam forms a friendship with a girl who works for Madame Mallory, Marguerite (Charlotte Le Bon) and gives him glimmers of hope of how good he is as a chef.

“The Hundred-Foot Journey” is set one of the most beautiful, picturesque towns in France. However, it is the beauty of the story that captured my heart (and the food

looked pretty good too!). This film shows us that regardless of what culture, region, or part of the world we originate, we all just want love, forgiveness, and charity among our neighbors too. All it takes to bridge the gap between our culture and someone else’s is a single step, regardless of what spice our neighbor use to cook.

I hope you enjoyed this film as much as I did. Tomorrow there will be an exciting announcement for my faithful followers. Stay tuned!

3 thoughts on “Day 7: The Hundred-Foot Journey: All It Takes Is a Single Step”